Victor Osimhen and Ahmed Musa both scored as Super Eagles of Nigeria claimed a 0-2 victory against Liberia in their FIFA World Cup qualifiers match for Qatar 2022.

A good game from the visitors which saw them doing everything possible to grind the result which moves them one step away from making the FIFA World Cup in Qatar next year.

This match wasn’t an easy one as the Super Eagles struggled despite having all their players making a return from injury except Etebo who remains out with him likely to be out until next year. 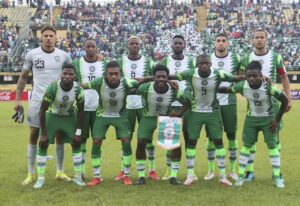 It was a good start between the two African Nations who made sure they did everything to see the first half of the encounter go in their favor which didn’t come that easy.

Liberia and Nigeria were good in the first 10 minutes of the game which saw them pushing forward with the visitors dominating things as they looked better than their opponent.

Napoli striker Victor Osimhen scored the opening goal in the 15th minute after scoring from the penalty spot which gave his Country a 0-1 lead which was well deserved.

Things continued looking good with more opportunities being created but nothing could happen as they both made sure their defending was good against each other attackers.

The first half didn’t bring any more as they headed inside for the break with the  Super Eagles of Nigeria taking a 0-1 lead against Liberia after 45 minutes played.

It was an eventful second half that could have seen the game provide more goals, but unfortunately, it wasn’t that way as most of the opportunities were wasted.

Liberia looked good in everything they were doing but they just couldn’t find a way to get the equalizer which could have done a lot with their confidence going forward.

It was all about the Super Eagles of Nigeria maintaining their advantage as they push forward with hopes of killing off the game before they approach the final stages of the game.

The game entered the final few minutes with nothing coming as it was already looking like a game won by the visitors who maintained a good composure pushing and holding things down. 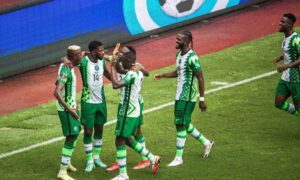 Ahmed Musa increased the lead for the Super Eagle in the 90th minute plus added time as he converted from the penalty spot to make the scoreline 0-2 as the game carried on into the final few seconds.

The encounter came to a conclusion with Nigeria taking all three points with a 0-2 win against Liberia which move them into the final phase of the qualifications series for Qatar 2022.