The encounter was an entertaining one in which top names from the football world participated including Nasri and Robert Pires who also had a great game last Marseille.

The match wasn’t all about just football players but Formula One driver Pierre Gasly also scored part of the goals which saw Arsene Wenger’s side losing the match at the end. 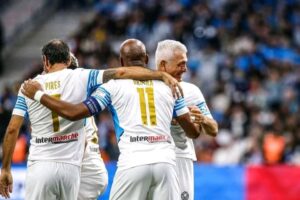 UNICEF XI started the game as the better side who took an early 1-2 before things got off their hands with OM Legends ensuring they got back and claimed a win which went a long way all through.

Chelsea Legend and Ivory Coast Didier Drogba were back doing what he does best on Wednesday night despite retiring long ago as he fired in a hat-trick in a charity match which was played in France.

The Ivory Coast man was on a Marseille’s jersey again in a charity match against Arsene Wenger’s UNICEF XI which starred alongside the likes of Arsenal legends Robert Pires and recently retired Samir Nasri.

It was a fun-filled game that saw Didier Drogba first scored a brace before going on to make it a hat trick and did his iconic celebration which sent the stadium to a buzz as he was unstoppable in the encounter.

The Blues Legend went home with the match ball after an electrifying performance despite retiring his boots long ago and stopped playing active football, but it didn’t look like he dropped a bit from who he was. 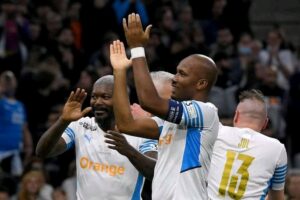 Arsene Wenger’s side had the likes of Trezeguet, Patrick Kluivert and Esteban Cambiasso who played a part as former Arsenal stars Robert Pires, Mathieu Flamini and Samir Nasri and Jens Lehmann also featured in the match.

It was a game of Champions which saw many names from across the globe gathered together to give a good time on the pitch despite them calling it quit with the game some years ago.

So much to be said about the Chelsea legend who made headline in the encounter as he scored a hat trick out of nothing to inspire the OM Legends to winning the game after falling behind.

Despite his football time far gone a bit, Didier Drogba still looked fit like someone who is still actively playing with a club or probably mistake him for a 25 year old player on his prime.

For Arsenal player Nasri, it was shocking to see how he already added weight with just few month into retirement which shows he is really enjoying his time out of active football.

So much could be said about others who came to play as they were looking very fit and showing quality on the pitch with goals raining from both ends which we witnessed 11 goals scored.

The encounter carried on until the end which saw OM Legends finish off the match by beating UNICEF XI 7-4 to get a victory which was celebrated by all the footballers and invited sport stars.