The Premier League is back as we are giving you a rundown of Brentford Vs Chelsea matchday preview of what’s expected to go down later today at the Community Stadium.

Both teams are expected to go up against each other as the English Premier League makes a return today Saturday which will see table-toppers Chelsea go up against newcomers Brentford at the Community Stadium.

Thomas Tuchel will be looking to maintain the lead they have at the top of the League table by ensuring they grab all three points and nothing less than that which is expected of them to do going forward.

Although it won’t be an easy task as the Bees have proven to be a tough side to beat with them beating Arsenal 3-0 in their opening game of the 2021-22 season and since then, they have been good so far till date. 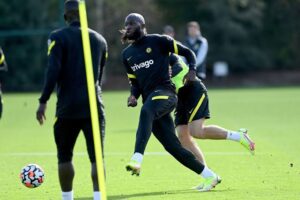 The last time Brentford Vs Chelsea happened, it ended with the Blues claiming a 4-0 against them in the Emirates FA Cup which was played back in 2017 which saw the London side sweeping them apart.

This time will be a different ball game as Brentford have improved a lot since making their way into the Premier League and their last game was a 1-2 win away from home against a formidable West Ham United.

While Chelsea last game saw them dispatched Southampton 3-1 at Stamford Bridge in a game which didn’t start well for Thomas Tuchel side who had to make sure they grabbed the win at the end of the day.

Brentford has been good in the Premier League which they only had one loss that came against Brighton And Hove Albion, which ended 1-0 and so far they have shown to defend a lot making their opponent hard to score.

Chelsea will have to be smart about this game later today with their opponent who has shown that they can defend so well which could be a problem as Romelu Lukaku has been struggling to continue his goal-scoring form this season.

It has been a crazy week for Thomas Tuchel who has had a lot to deal with from his players who picked up injuries while out on international duties while some already had theirs before the break which was needed.

Thiago Silva is expected to miss the match, although not because of injury but due to an international break which saw him represent Brazil who was in action earlier yesterday and is expected to be back with the team.

‘He will be back in the afternoon, hopefully, safe from this match in Brazil,’ Tuchel revealed. We had our talk today about Brentford, we had our tactical training and he missed all that.

More worries as Rudiger, Hakim Ziyech, and Christian Pulisic are also ruled out of the match against Brentford due to injury while the Moroccan is out of the encounter due to illness but Romelu Lukaku is available.

Here Is What He Said;

‘Toni Rudiger is injured. ‘He came back injured from his national team so is also not available. Christian Pulisic is still injured and not available.’

‘We have some doubts with Hakim Ziyech,’ he added. ‘He missed the last two training sessions with a headache and it seems that he’s not with the squad tomorrow.

‘Romelu is fine. He has been doing all the training sessions and he will play tomorrow.’

The squad looks good despite all the doubts as Reece James and NGolo Kante made their return which they trained with the rest of the team as both players didn’t go for international duties due to one issue and another.

BRENTFORD VS CHELSEA LINEUP AND FORMATION (3-4-2-1)

The team is currently not in full shape as several players have been ruled out of the encounter due to injuries while some are due to illness, but Thomas Tuchel still has enough firepower which he will be naming a very strong squad.

These are the players expected to start between Brentford Vs Chelsea which a win is expected of the Blues who currently sit top of the League table after seven games played with the lead with one point above Liverpool. 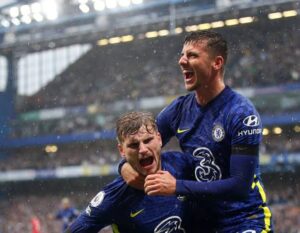 The encounter between Brentford Vs Chelsea is scheduled to go down later today at the Community Stadium by 17:30 UK and 5:30 PM Nigeria time as the game will also be streamed live here on our next update.

So much is expected to happen in the match after the International break which we could see the Blues maintain their lead on the English Premier League table or slip down for Liverpool or Manchester City to overtake them.

This encounter looks like a one way ticket if we are to go from their previous meetings which Chelsea have been able to get the better of Brentford who lost 4-0 twice in 2013 and 2017 both in the FA Cup.

The Bees look formidable this season following their promotion to the English Premier League which they have only lost one game the same as the Blues who only won more than the home side with more draw.

If you are looking to stake on this match u can either go with a straight win and under 2.5 goals as Brentford are not a side known for conceding too many goals with Chelsea also a low scoring side with Romelu Lukaku struggling.

We strongly believe this will go to the Londoners who have so much quality going forward and you could place them on direct win with over 1.5 goals to make sure the odds add up to increase your cash out.

Those are the outcome we expect to happen later today with so much to come from the Blues as Romelu Lukaku will be looking to break his goal drought while Timo Werner will be coming with his form for Germany.