Samantha Kerr scored a brace and made one assist as Chelsea thrashed Man United at home 1-6 with Fran Kirby also getting her name on the score sheet in Barclays Women Super League.

It was a wonderful game for the Blues Women who made sure they made light work of their opponent as Pernille Harder alongside Drew Spence and Jessie Fleming also was able to score this time after their rough start to the season.

The goals could have been more than what was scored as many opportunities were wasted by the London side who dominated the affair all through 90 minutes of hostilities with goals flying in everywhere. 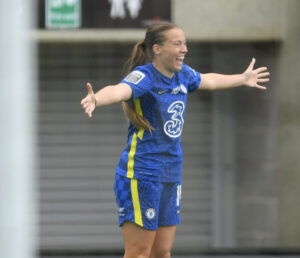 The first half was one-sided as the visitors took their opponent to the cleaners with so many talking points which leads to three goals being scored despite the attempts to stop them from going in.

Chelsea Women set the ball rolling in the 2nd minutes of the game as Fran Kirby teamed up with Samantha Kerr who helped her with the assistance before the British International scored to make it 0-1.

Nothing could be done by Man United Women who were left hanging and doing all it took to stop their opponent as Pernille Harder scored another goal in the 24th minute to make things 0-2 with a brilliant finish.

It was looking bad for the home side who could only do the little they can to make sure the goals weren’t that much as the first 45 minutes progressed further into the last few stages left to play between them.

Samantha Kerr made it 0-3 in the 41st minutes as she teamed up with Fran Kirby who located the Australian perfectly before she finished off neatly for the goal which extended things for the visiting side.

The first half carried on further without anything happening until the referee ended things with Chelsea Women taking a 0-3 advantage into the break against Man United who was unable to make things work out.

Both teams came out for the second half of the game as things looked a bit different than it was in the first 45 minutes which saw the Blues dominating things against the home side who were poor.

Man United Women pulled one back in the 48th minute of the game after an amazing play saw Alessia Russo converting neatly to give her side something to hold on to with the scoreline 1-3 as it progressed.

When things were looking good for the Red Devils, Chelsea Women scored again in the 51st minutes which came through Samantha Kerr who made it her brace, and 1-4 for the Londoners who kept looking for more goals.

The game progressed with everything looking balanced as both teams had a fair amount of control, but the scoreline remained a big difference which more opportunities continued to come by, and none converted.

Drew Spencer extended the lead as she scored in the 87th minute from an outstanding finish which saw the scoreline 1-5 more embarrassing after Bethany England provided the assistance which lead to the goal. 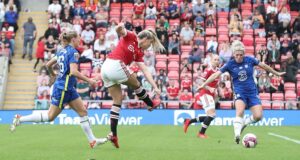 Another one again in the 93rd minute of the second half saw Jessie Fleming scoring to make things more worst as the scoreline became 1-6 after an incredible team effort resulted in another beautiful finish in the encounter.

The referee finally ended the game with Man United suffering a 1-6 defeat at home against Champions Chelsea who made sure they didn’t hold back in attacking and demolishing their opponent at their home ground.