Another big encounter between Chelsea Vs Man City is about to go down in the next couple of minutes as the English Premier League is back with live stream from us.

Last time Chelsea played against Manchester City at Stamford Bridge, it ended with the Citizens claiming a 1-3 win in the Premier League encounter which was during Frank Lampard era.

New manager Thomas Tuchel came in and made the big difference as he played them in the return leg at the Etihad and won 2-1 as they were in top form before heading for that trip in the League.

Chelsea Vs Man City met again last season in the Emirates FA Cup and the Blues from London still went ahead winning that match which saw them advance to the final and lost to Leicester City. 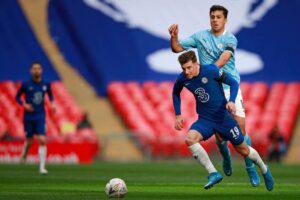 Their final meeting for last season went down to the Uefa Champions League final which Chelsea claimed victory that night to lift their second European title after winning it back in 2012 with Roberto di Matteo.

It been a good season so far for the two teams who will be going up against each other in a couple of minutes as we await for formalities to being which the lineups are already out, check below.

The official lineup are out already and we should be expecting action to kickoff as soon as possible with both managers looking to make thing happen here at Stamford Bridge.

It been big talks going on ahead of the game as Chelsea and Manchester City have equal chance of getting anything out of this game due to their run of form this season which has been good.

Thomas Tuchel’s side recently played against Aston Villa in the Carabao Cup and it ended 1-1 in regular time as the Blues claiming a 4-3 win via penalties as Kepa Arrizabalaga was the man of the match.

While Pep Guardiola’s side thrashed their opponent 6-1 in the same competition which they currently hold the title as they were crowned winner last season after beating Tottenham in the final 1-0.

The game is about to kickoff as we already have visuals coming from the pitch and don’t forget to stream the game via the link that will be provided below the post as you scroll down.

Anything could happen in this match with Chelsea manager admitting it’s a 50/50 game which anything can come out, but he is sure his players will get the job done just like they did against other opponents this season.

The Blues have only drew one League game which was against Liverpool who they are currently joint top of the Premier League table with 13 points each as they have played out same results in all games so far. 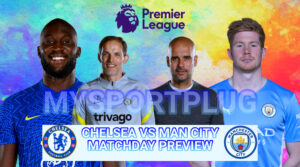 So much could be talked about this encounter but no time as the game is about to kickoff and you can scroll down to locate the “STREAM HERE” Button so u can watch live from your mobile phone and PC.

You don’t need to register or fill any details to get access to view the game as you will directly be streaming live from Stamford Bridge at no cost or hidden charges from your network provider.

Kindly drop comments and share so we can know you are following the game as u can also predict who will be smiling with the victory today as Chelsea Vs Man City is going on live.