Chelsea are set to miss Christian Pulisic who was injured during the USA match against Honduras in their FIFA World Cup qualifying match.

The Blues are still not sure about Romelu Lukaku featuring in their next game against Aston Villa, and now they have to deal with Christian Pulisic blow which won’t be good for their team ahead of a busy schedule.

The Chelsea winger limped off in the 62nd minute on Wednesday night during their game against Honduras as the player has been confirmed injured and likely to miss out on the Aston Villa clash this weekend.

Christian Pulisic played all 90 minutes on Sunday against Canada despite recently recovering from Coronavirus which saw him being placed in the team as they played out a 1-1 draw against the Canadians. 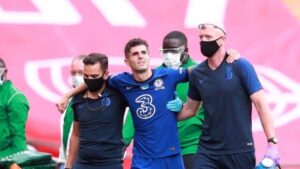 Here Is What Was Said About Christian Pulisic Injury;

“Christian has a slight ankle injury,” USMNT coach Gregg Berhalter said after the game. “We’re going to get more info on it when he goes back to London, the severity of it.”

The injury could be something that might see him miss a couple of games as Chelsea will be looking to manage him due to him being injury-prone always and this has always been a problem to his career.

Wednesday’s match was the USA National team’s last of the international break and Christian Pulisic is set to return to Chelsea in the coming days where he will be examined and the extent of injury revealed.

The forward is likely to miss out as Chelsea are set to host Aston Villa on Saturday before kicking off their Champions League title defense against Zenit St Petersburg on Tuesday in the group stages. 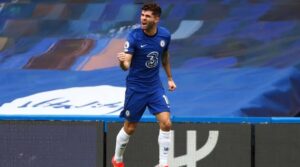 It has been a not so good International break which have seen the likes of NGolo Kante, Romelu Lukaku and now Christian Pulisic all likely to miss out on few games as they need more time to recover to be able to feature again.