Tammy Abraham has finally hit the group running in his second game in Italy which saw him getting his debut goal for Roma away from home against Salernitana.

The former Chelsea striker find it difficult to get playing time after Thomas Tuchel was named manager of the club, following the sacking of Frank Lampard during the second half of last season.

A move was finally completed earlier this summer and now Tammy Abraham is now making a difference in Roma with just two games gone he already becoming one of the best in Italian Serie A.

The Blues were advice against this move which they had no choice than to allow it happen as they needed someone who can bring more on the table as the team have struggled to land the Premier League title since Antonio Conte left. 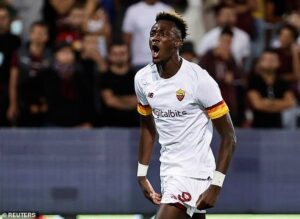 Romelu Lukaku was brought in while Olivier Giroud and Tammy Abraham who delivered most of Chelsea goal last season were sold both to the Italian Serie A sides of AC Milan and AS Roma.

Lucky enough, yesterday they both scored their debuts goals which saw Olivier Giroud scoring a brace within 45 minutes as Milan thrashed Cagliari 4-1 while Abraham got just one as Roma beat Salernitana 0-4.

The goal came as a result of a nice build up from play which saw Tammy Abraham converting with a one touch to smash the ball past the goalkeeper who couldn’t make a move to stop the finish from the striker.

Fans were quick to go and share their opinions after the games which both strikers scored and most of them were glad they left instead of their talent being wasted on the bench.

“They told me what they want from the club and how they see the club moving forward.

Jose Mourinho is certainly making some changes as he has totally changed how the team plays after making sure some players include Pedro Rodriguez were told to leave the club this summer and new faces brought in to blend with the old.

Roma will playing their next game against Sassuolo and Tammy Abraham will be looking to add more goals to his name as the fight to earn back his England shirt continues in a different League.