We once again bring to you Liverpool Vs Chelsea match live which you can be able to stream below on this content as you scroll down to enjoy live football here on our website.

Today’s game has shown so much in expectations from the fans who have been patiently waiting to see how it all goes with this rivalry which is as old as football in England picked up it pace.

Liverpool Vs Chelsea is the second biggest game to go down today Saturday after we witnessed Manchester City dismantled Arsenal 5-0 with Ferran Torres hitting a brace as Kevin De Bruyne miss out.

All things up for grabs with the two sides looking to maintain their 100% unbeaten run which will be the main focus as Manchester City is now showing up their dangerous form which can’t be stopped easily.

With the spendings made by Chelsea from last summer till now, they will be looking to get the English Premier League title this season despite just coming from the back of their second title in months which is the Uefa Champions League and Super Cup.

Jurgen Klopp also saw his side struggled last season to make top four and this time they are blazing out after the return of Virgil van Dijk who suffer a horrific injury that kept him out throughout the remainder of last season.

So many more we can talk about this game as players are now showing up on the pitch with the game set to kickoff anytime soon as we await to see we gets it all here at Anfield.

Last time both sides met on Anfield it was Chelsea who claimed a narrow 1-0 win against them as the Reds where struggling at the time without their defender who was injured and Trent in very bad form. 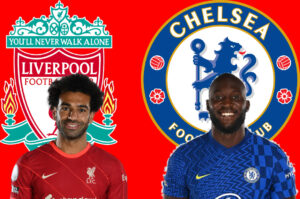 With Liverpool Vs Chelsea set to go down, who do you think will smile at the end of the encounter as await kickoff which should be at anytime and you can scroll down to watch the match live.

Both teams had it on each other last season as the Reds won at Stamford Bridge while the Blues won at Anfield, making it three points each but the victory by Liverpool was high.

The match is about to kickoff so kindly scroll down to watch the match live on your mobile phone for free of charge with live English commentary from anywhere and make sure you drop your comments.

1: A good kickoff as the game at Anfield is now going on live with the Reds attacking and getting us into play as we have seen as it’s a fight against two Germans in Jurgen Klopp and Thomas Tuchel.

2: It been a good game so far between them as we expected earlier that we will be witnessing something exciting from the two sides that have been going strong this season.

3: it been a cagey affair with both clubs looking to gain balance from their own end while making sure nothing goes wrong in the early few minutes which could mean something bad for their confidence.